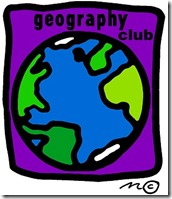 Once a month we meet with a group of homeschoolers at a local library for geography club. Families take turns organizing the meetings, which simply means that they choose a region to study, assign countries within that region to other families, and plan a few crafts or activities to do. Oh – and bring food from that region, too.

Each family prepares a presentation of some sort about their country. It can be an overview, about some aspect in particular that interested them, or anything, really, as long as it is about the country they studied in some way.

The presentations are as diverse as the families involved. We see everything from poster displays, traditional reports, and skits to game shows, Lego models, and science experiments.

Or it might be a combination like the Lego model Trevor prepared of the Solomon Islands with its active off-shore volcano – that smoked throughout his presentation thanks to the dry ice and water he’d added just before he began to speak.

Last month we explored the Scandinavian and Baltic countries.

Our family studied Norway, and Trevor decided to put together a lapbook full of information. We pulled the mini books from Homeschool Share and read a few books about Vikings as they were of particular interest to the kids. 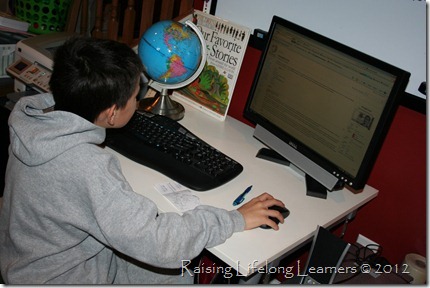 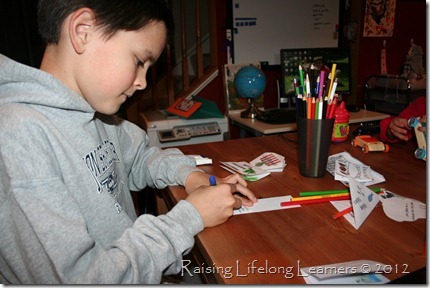 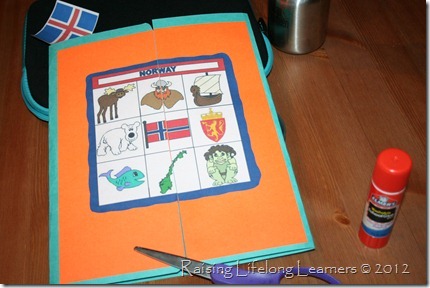 My confident-older-than-her-years Molly usually refuses to get up and share. {Her first club meeting was a bit traumatic for her.

She had things prepared to share, got up in front of the group and shut her mouth – literally. She clamped her fingers over her lips and froze, and couldn’t speak a word.} So, I was pleasantly surprised that she wanted to get up and share her coloring pages of Norse gods and goddesses. She did a great job and everyone cheered for her. 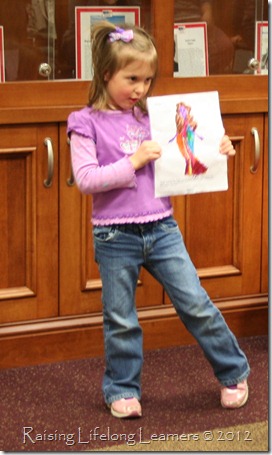 Trevor, on the other hand, has no problem sharing his work. Although it probably was not wise to tell him  that he was the last one to go and the sooner he shared his work, the sooner the kids could play and eat{as he asked us to give him some more time to get ready}.

He took us at our word, got in front of the room and said, “This is the lapbook I prepared about Norway. I’ll pass it around. Take a look through it and stop me later if you have any questions.”

Amazingly, everyone thumbed through the lapbook while we played and ate – and a few of the adults AND kids stopped him later to talk to him about his mini books. A born… what? Operator? Leader? Delegator? We’ll have to see what God has in store for that one. 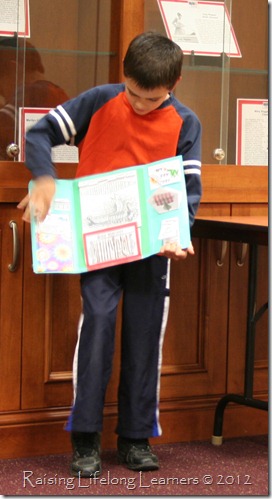 Did you know that Lego was invented in Denmark? Perfect excuse to break out the Lego bins and play – adults and children alike. 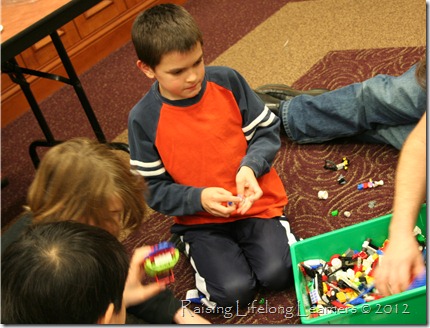 Molly preferred the coloring table. Our family teamed up with another to plan this month’s gathering, and our contribution to the activities were coloring pages of Vikings, ships, and Norse mythology.

We also set up a table with three laptops {yes, I have a slight technology addiction as I didn’t have to borrow any of them} displaying a rune translator powered by PBS NOVA. Kids were invited to input their name, have it translated to Norse runes, and copy it on wavy craft sticks with colored Sharpie Markers. Then they decorated the stick in any way they chose to keep as a bookmark.

The kids had a great time inputting their names, and then funny sayings, and copying the runes. Hilarity reigned at that table. Sadly, I don’t have any pictures of that because by then, Logan was {literally} running amok, and I was in chase, then contain, mode. The camera was stowed. 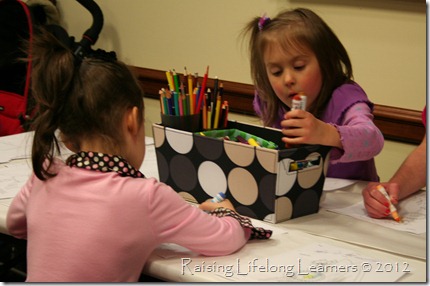 Our contribution to the food table was a yummy split pea soup that I had cooked in the crockpot overnight so it was ready for lunch at the library. {I didn’t take a picture of that, but might make it again and take step by step pictures.} The in-progress look of the soup is fabulous, but split pea soup doesn’t have a very appealing look to it when finished.

The Viking bread, though, looked beautiful. I’ll post a tutorial on this tomorrow since Trevor made it himself {with a little help from his Lego ninjas} and it was really good. If you’ve ever heard “brown bread” mentioned in historical fiction or history texts – this is it. It’s hard, dry, and filling. Perfect for Vikings, settlers, and other ancient people.

It was pretty good for us, too. Especially warm, torn apart by hand, and drizzled with local honey… 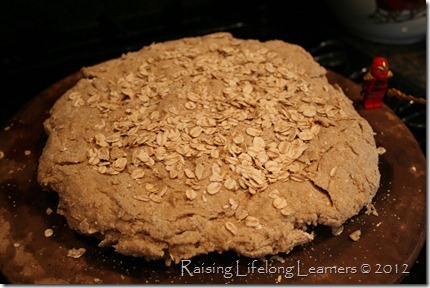 As for Logan, all that “hands-on learning” {read: causing trouble} wore her out: 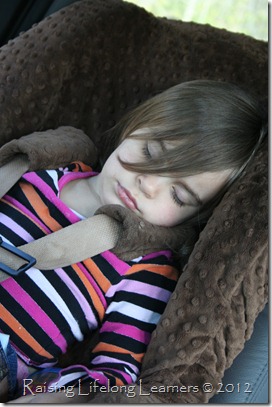 A geography club, or other academic meeting, is a great way to encourage shared learning, public speaking, and fellowship among homeschool families. It’s also a nice way to help your kids learn about a lot of new things without having to teach everything yourself.

Kids in our club listen to each other’s presentations, talk about the cool things they’re learning, play with each other and form friendships, try foods they may otherwise avoid, and realize that it’s cool to learn and study new things.

Social gatherings based on shared learning – what a simple, effective way to encourage a love of education in your kids, and grow them into lifelong learners.

Do you have suggestions for other clubs and groups that are fun for homeschool families? We’re trying to figure out some new activities for the summer and fall. I’d love to hear some of your ideas and experiences. 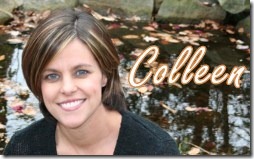