There Are No Quick Fixes 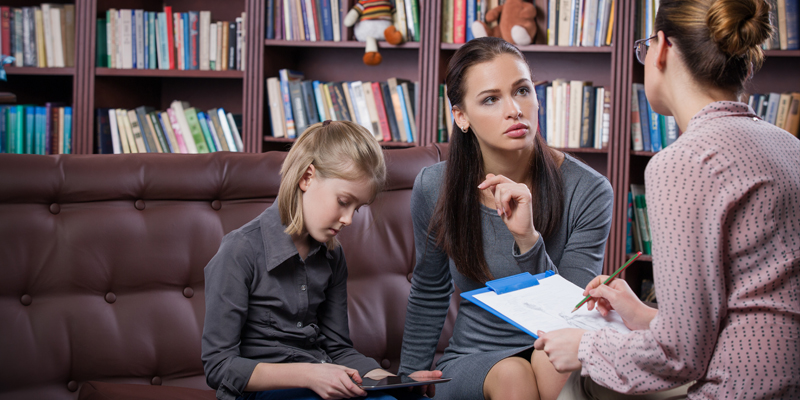 We waited months for that first counseling appointment. Very long, emotional, hopeful months. We knew our son was going to benefit from therapy, knew he needed it, knew we needed it. School issues, social difficulties, peace at home, the overwhelming fear and guilt that I felt as his mom… a lot was riding on this therapy, and we could not wait to begin seeing the difference and improvement that was sure to come.

When I walked into that first appointment and sat across from the therapist, I was practically bouncing with excitement. I love my son and didn’t want to change who he was, but there were some behaviors that needed to change… and fast. What I discovered, however, was that in therapy, in life, in dealing with extreme and intense kids, there just are no quick fixes. 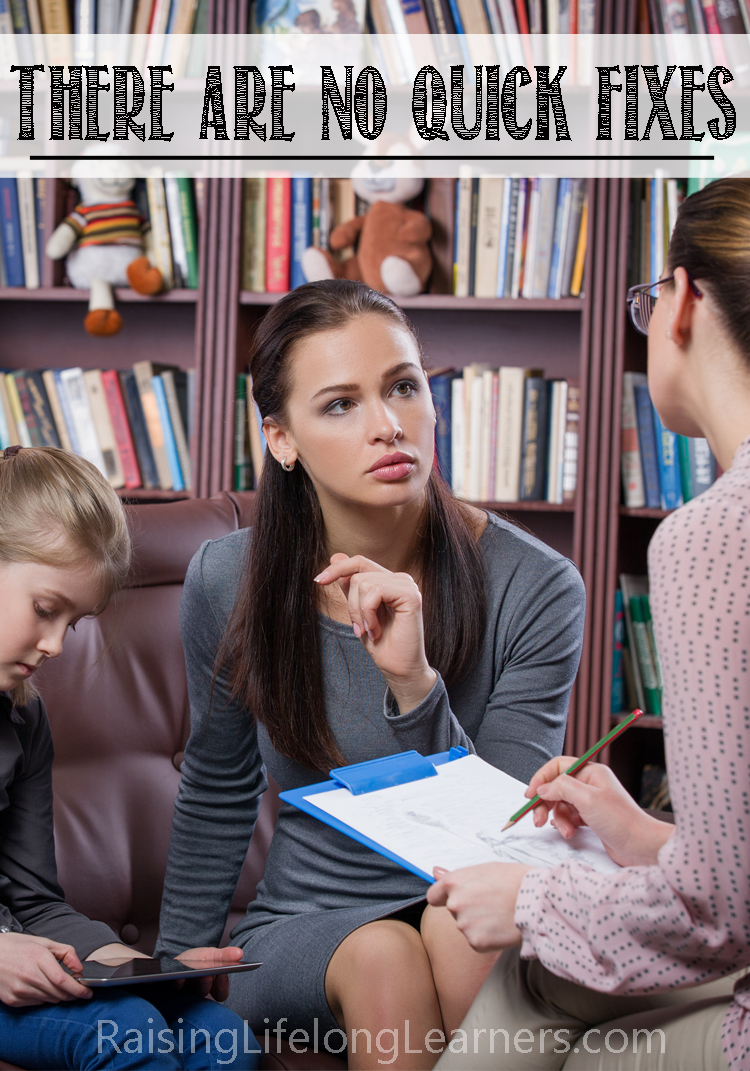 Imagine my disappointment when the first appointment didn’t even include my son. It was a time for me to talk with the therapist, share my concerns, answer a million background questions. I understood the need for it and was grateful for the commitment this therapist had to truly understanding all of the factors before jumping in… but I really wanted to see a change.

I wanted to come home and go a whole evening without someone crying. I wanted bedtime to go smoothly. I wanted to not be yelled at. I wanted the next day at school to be peaceful and free of phone calls and altercations. I wanted someone to look at me and say, “You’re right, this kid is hard, but let’s flip this switch right here and fix it!”

That’s not how therapy works, though.

In fact, therapy isn’t even totally about the child.

Already I was feeling the urgency of quickly rewiring bad habits and faulty thought patterns that my son had developed. Already I had put all of my eggs into the therapy basket. Already I was waiting, waiting to notice a difference in his behavior. I had all of my hopes for the future tied up in my son’s ability and willingness to listen to the counselor, make the changes, and give us a return to normal life. So when I found out that I’d have to be doing as much work as my son, I was shocked.

Related: Does My Gifted Child Really Need a Label? 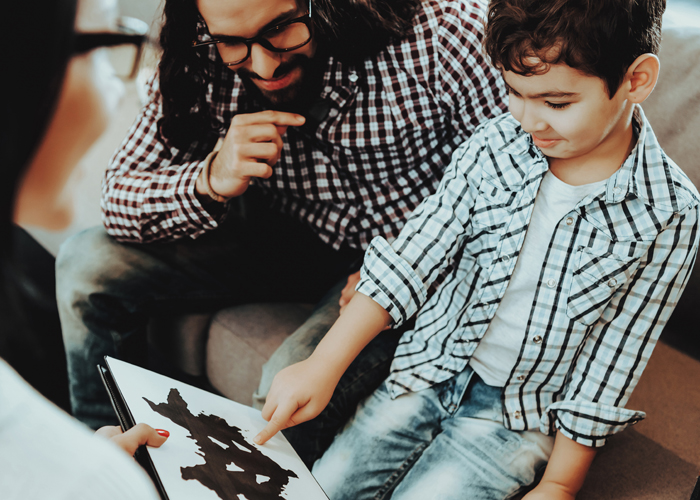 But therapy isn’t about training a child to fit into a box, it’s not about breaking them down to compliance, and it’s definitely not about proving to a kid that they’re wrong and their parents are right. Therapy is about healing. Therapy is about re-training, re-wiring, forming new habits and new patterns of thought. And sometimes, oftentimes, that requires examining the flawed patterns you have found yourself in as the parent. Maybe out of survival, maybe adapting to the stress and strife at home, maybe carried over from your own dysfunctional childhood, or maybe there’s nothing inherently wrong with how you do things, they’re just not what’s best or most helpful for your child’s progress.

Maybe what you wanted your child to do isn’t what they needed to do.

Maybe what you thought was their opposition was actually their reaction to your own rigidity.

Or maybe you’re doing everything absolutely right, but they still need your help staying on track.

Your habits have to change. The way you speak to your child has to change. The way you react, punish, redirect. As your child makes progress and begins to learn new mechanisms and tools in therapy, you have to be the one to facilitate that at home. I was excited about the prospect of progress as my child began therapy, but I was utterly unprepared for the amount of work and prodding and dedication it would require of me as I was peeled back out of my own comfort. What I thought would be teaching my child how to behave in a way I wanted them to became an exercise in doing what’s best for all of us, and I was one of the major participants. 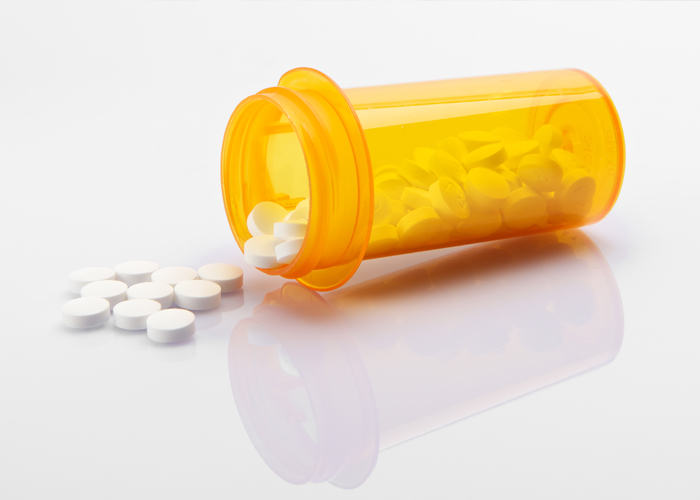 There are no quick fixes in therapy, especially for quick-brained children. In fact, there are rarely quick fixes for anything when it comes to these gifted kids of ours. Whether it’s grade acceleration in trying to fix an academic issue or medication to try and regulate a chemical or behavioral one, there’s no switch to flip or fingers to snap. Change, progress, growth, healing… these take time. They’re a journey. They’ll have setbacks, stumbling blocks, discouragements. What you hope works first may make things worse, and what you tried 99 times may take until the hundredth to actually make a difference.

People, gifted people, gifted children… they’re smart. They’ve taught themselves a lot, more than most, and it takes time convincing them that their hard-earned neuropathways need to be redirected. Every action, every habit forms a little path through their brain, and the more these actions and habits are acted upon, the smoother that pathway becomes. Therapy is first asking them to admit that the path they’re on is a harmful one, then to build new ones, new trails that lead away from the practiced path and instead venture into the unknown, untried, unsure. This is not a quick fix, it’s a battle against the brilliant self, against a superior mind that is well aware of it’s abilities.

Therapy requires re-wiring, re-training, re-learning, and doing these things with a highly intelligent person requires a lot of work. Lots.

They can (and probably will) question everything. Why do I need to change this? Why is your way the only way? Why can’t it be seen my way? They have the ability to manipulate, to charm, to use their intellect to their advantage and avoid making any major changes. They have overexcitabilities that can masquerade as disorders, muddying the waters. They are complex, intelligent, and often very, very rigid. So again I remind you – there are no quick fixes in therapy.

The next time you’re venting on a parenting board or asking for advice with your tough kiddo, remember that whatever comments you receive will require work, investment, time. There won’t be a quick fix for your child’s anger, or your child’s sensory issues, or your child’s sleep troubles, or the wall your child builds up when faced with something difficult. Commenters toss out “growth mindset!” or “teach grit!” as though they were magical therapy dust that instantly changes a desperate situation with one well-placed word. Remember that as easy as it is to find advice, it’s pretty tough to implement. Don’t be discouraged when it takes months to notice a change, and don’t keep waiting for the one magical therapy appointment when your child leaves completely healed of all bad habits. There are no quick fixes, unfortunately, but know that the slow and steady therapies and methods do, like water on rock, form long-lasting change. There are no quick fixes, but, thankfully, there is hope.

RLL #69: [Audioblog] Seven Tools for Peaceful Parenting that You Can Use Today