If at First You Don’t Succeed, Quit | Gifted Kids and Grit 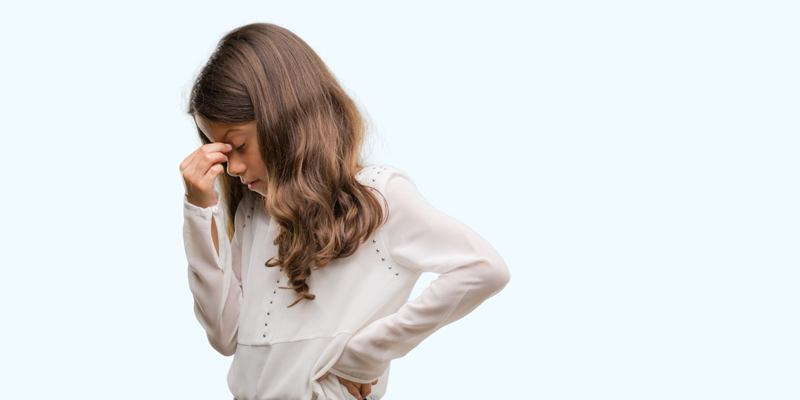 We love playing family games in my house. Board games, trivia games, acting games – there is no limit to the games we enjoy, and our packed game closet shows it. Since there are five of us it isn’t always equal enough to split into two teams, so most of the time it’s every man for himself. I’m not competitive so it doesn’t matter either way to me, my middle kiddo is passionately competitive so he enjoys the chance to beat everyone on his own, and my youngest usually loses interest and wanders off to dance. But my oldest, my most intensely perfectionist child, my people-pleasing, brilliant kid – he’s not a fan of individual gameplay.

As long as he’s winning, he’s into the game. But once he slips behind the lead or proves to not be an instant expert at whatever we’re doing, he gives up. Well, maybe not gives up, because he doesn’t quit playing or stomp away muttering about unfair rules. He just stops trying to win, instead switching over to playing a character, the role of the kid who doesn’t care how well he does. He nonchalantly plays poorly, on purpose, and laughs at his misfortune. He goes from a competitor to a court jester and makes a huge show of making sure everyone knows he doesn’t care that he’s not winning. It’s not that he’s disrespectful, he doesn’t lack skill, it’s just that the kid has no grit. 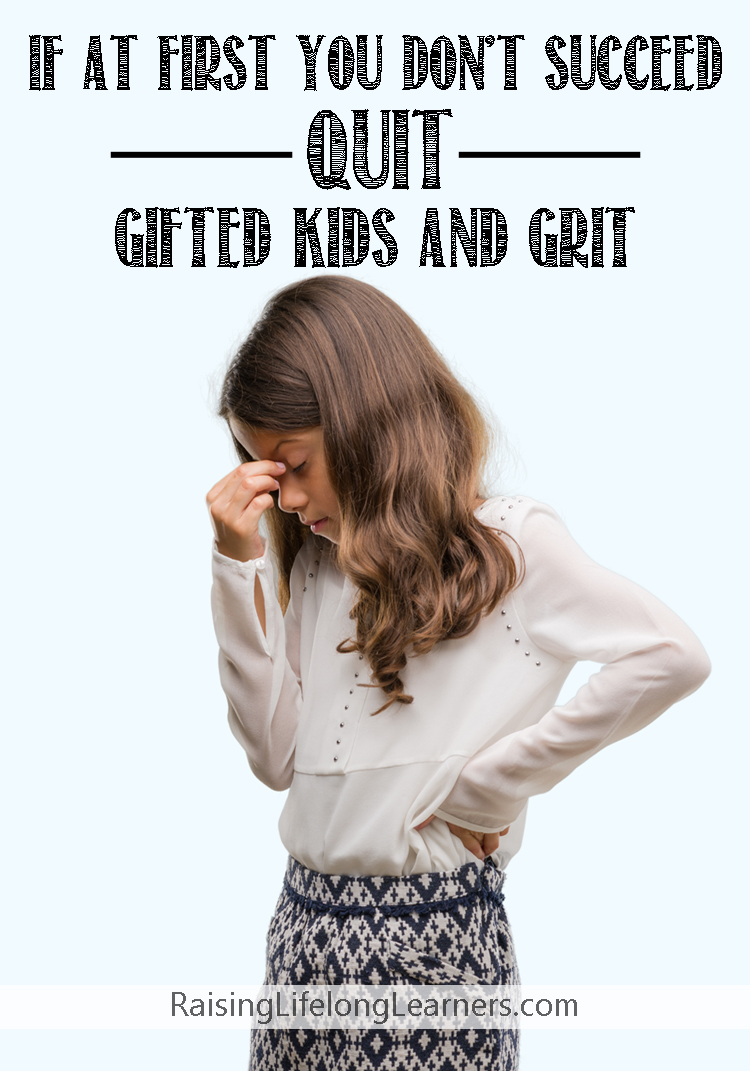 The concept – and importance – of grit has come into the spotlight in recent years, largely thanks to Angela Duckworth’s best-selling book Grit: The Power of Passion and Perseverance. Fitting perfectly into the equally-popular concept of growth mindset, grit is the drive to persevere, to get back up after falling down, to show strength of character in the lack of success. Grit is how you bounce back and work at trying again. Grit has everything to do with effort and attitude, and nothing to do with natural ability, intelligence, or talent… which is why grit is such a struggle for so many gifted kids like my son.

A lot comes easy to my gifted kids. Like others within the same standard deviations, they are able to learn quickly, master with little practice, and slide right through a lot of their classes without much effort. I didn’t even know that my kids were gifted for the first several years of their lives because each of them read so early that I thought it was normal. My oldest, especially, puts in little effort at school for the rows of A’s that he earns on his report cards.

He is a natural math whiz, even working out slope formulas for fun when he was younger. His vast vocabulary and acute observations of the world make him an excellent creative writer. He even helped the students a few grades of him while taking an accelerated science class. The kid is just great at school and learning – and mastery – require almost no effort for him. He’s used to school being easy. So it comes as a shock when he’s faced with something – or someone – challenging.

Related: Resiliency and Why Our Kids Need It, Managing Perfectionism: 10 Tips for Helping Your Child 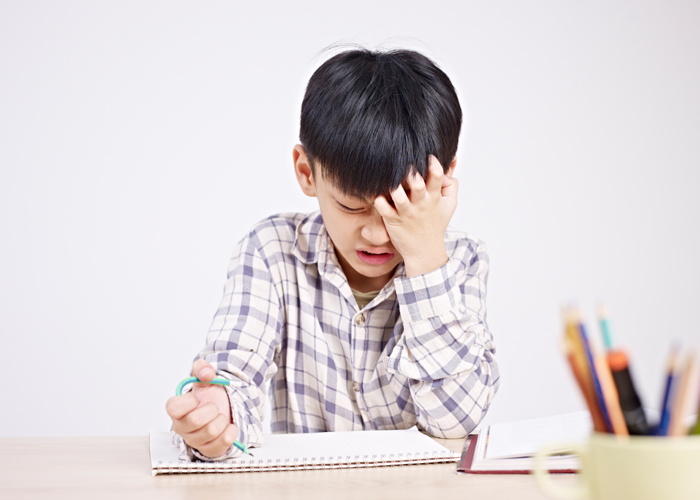 Gifted kids can struggle with grit for a number of reasons. Anxiety and perfectionism can be so overwhelming that the thought of trying and failing is scarier than sitting out completely. People-pleasing can instill a fear of disappointing others should they not perform as expected. Not being challenged hard or often enough can trick the child into thinking everything is easy, then when faced with a difficulty they don’t know what to do. Not enough practice responding to challenge, the false idea that suddenly struggling means they’re not as smart as they thought, thinking they’d rather be unbothered than embarrassed – there are plenty of roads gifted kids can take to arrive at the same conclusion. They lack grit.

Ideally, we’d start from the beginning and teach our kids how to develop grit, but most parents end up having to amend our plans the more we get to know these little people, right? Truthfully, many of us are probably star-struck and in awe of how naturally talented our kids are. We see them pick up reading or coding with little effort and marvel at what they can do, with little thought to the idea that they need to also work at what doesn’t come easy. Grit is one of those character traits that is easy to forget about developing until you find yourself faced with a lack of it.

Since we can’t go back in time and grit, by definition, takes hard work, we have to purposefully work with our kids to present struggles as opportunities. Habits have long been forming neuropathways in their brilliant brains. Reframing challenges takes time, work. Simply redefining what it means to struggle or not perform perfectly won’t be enough to form grit, it’s something you’ll have to remind them of, and model, over and over. And over again. Then some more. Like learning, grit is a lifelong development with no shortage of opportunities to practice.

So how do you help your child develop grit? There’s not one answer, a single exercise, or a sole conversation that will direct your child away from perfectionism and towards determination. It’s important to remember that practicing grit takes grit. Shifting perspectives and reactions is similar to water over river stones – it takes time, but each trickle is having an effect. 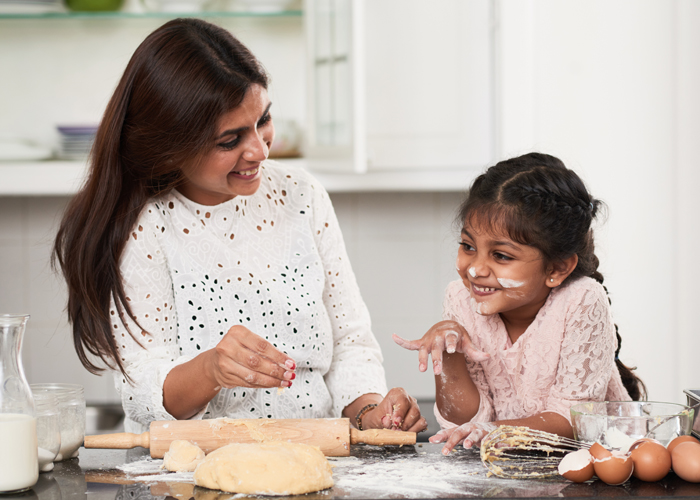 One of the simplest ways to remind your kids to practice grit is adding a small word to the end of their frustrations – yet. “I can’t do this!” Yet. “I’m no good at this!” Yet. Grit requires helping your kids dig themselves out of the trench they’ve resigned themselves to, helping them to see the greys in between black and white, between starting and perfecting. Rigid, perfectionistic thinking will have them believing that everything they attempt is either/or – either they’re great at it or not. Grit is found in the in-between, in what follows yet. While being careful not to dismiss their feelings of frustration, help them to adjust their vocabulary and thinking whenever they find themselves facing a challenge.

Modeling grit is one of the most impactful ways to introduce determination, and if I’m being honest, I needed the practice myself. Having my perfectionist son by my side when I crack an egg and accidentally drop a bit of shell into the bowl is as much a learning opportunity for him as a practice in curbing my own perfectionist tendencies. Catching my breath when I’m overwhelmed by unclear driving instructions, pulling over, and problem-solving rather than exploding in frustration. Laughing when I sing the wrong words to a song or get a math problem horribly, horribly wrong, turning a stumble into an impromptu dance move – these are all seemingly small but incredibly impactful models of working with a problem. Not giving up, not ceasing to care, but embracing what it is and making it into something that works.

Make a point to recognize when a character in a book or movie is choosing to persevere. Research famous mistakes that became wins. Watch blooper reels and footage of athletes practicing. One of the most impactful instances of grit I’ve ever encountered was at a museum exhibition of the iconic house of Dior, whereupon admiring original design sketches I was struck to see eraser marks and faded pencil lines. Designers at the top of their game in one of the most revered fashion houses still didn’t get it right the first time. Be intentional about making the process as important as the outcome, not simply making heroes of those who achieve greatness but considering also what it took to get there. This same son of mine has mentioned before that sometimes watching events like the Olympics or talent competitions can make him feel “dumb”, since he can’t do the same things. What a classic example of a kid who uses either/or thinking, right? So often humans celebrate the outcome with little thought to the journey, the stumbles, the scars, the setbacks. Emphasize all that happens between the starting line and the medal podium, remind them that while many things come easy, not everything is supposed to, and it is normal and healthy to have to work at it.

There are, of course, resources to help you along the way, such as Angela’s book or one of our favorites, Big Life Journal. I remember a mom at one of Colleen’s speaking engagements sharing that her son grew enormously more flexible by watching videos of champion domino sequencers failing at lining up their dominos correctly. Accidental topples, incorrect spacing, it was all eye-opening to him to witness the mistakes that ultimately weren’t visible in the final (perfect) product. Start a project together or pick new hobbies that allow for a learning curve, something intimidating or foreign so that no one can fall back on already-acquired skills. Grit isn’t something that is shamed or shouted into a kid’s mind frame, it’s best soaked up when offered with encouragement, support, reality, and flexible language. When your kiddo wants to give up, rather than punishing or calling them a quitter, offer to help them through a step that is causing frustration. Help them to break down dreams and tasks into digestible steps when the finish line is so overwhelmingly far away. Remind and encourage your kids that their worth or intelligence isn’t changed by challenge, and celebrate baby steps often.

History is filled with feats of heroism and accomplishment. We can name the first man to set on the moon, the Olympian with the most gold medals, the authors of successful series, and artists with works that continue to inspire through the centuries. We are familiar with the results, but rarely learn of the process. Gifted kids have been recognized from an early age for their abilities, the finish lines they seem to leap over in a single step. Not a lot is difficult for them, especially in the younger grades, so when they are suddenly faced with challenge or failure, they haven’t yet had to practice how that feels, let alone how to work through it. Grit is an incredibly important and rewarding trait to help them build, not just for their own strength as they persevere, but for what will come of it when they do.

More support is now available for your child, and for you!

This community was created to support children in building social emotional skills, including resiliency. In fact, we have an entire month dedicated to helping children strengthen their resilience and flexibility.

We address topics just like this all year long, in a way that is educational and fun for children. They learn skills to help them copy and you learn how to help them along the way.

Help! My Gifted Child Is Worried All The Time

RLL #94: The Importance of Music with Jessica Peresta 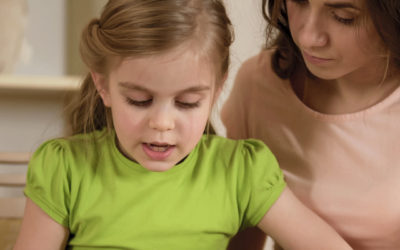 5 Things You Need To Know About Homeschooling Gifted Kids 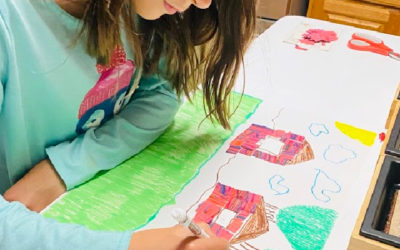 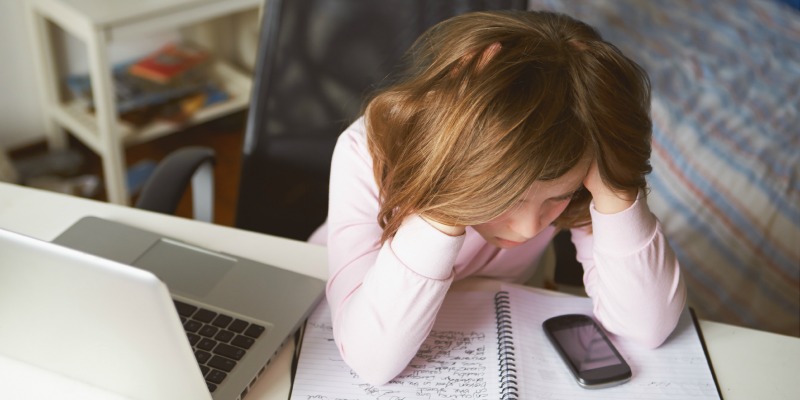 Is Homeschooling Ruining Your Neurodiverse Child?